The Avro Vulcan was designed by Avro as a high-altitude strategic bomber powered by jet engines. It was in service with the Royal Air Force from 1956 to 1984. It first flew in August 1952, was introduced in September 1956, and was retired with RAF in 1984. The Vulcan was produced until 1965 with a total number of 136 aircraft built including prototypes. 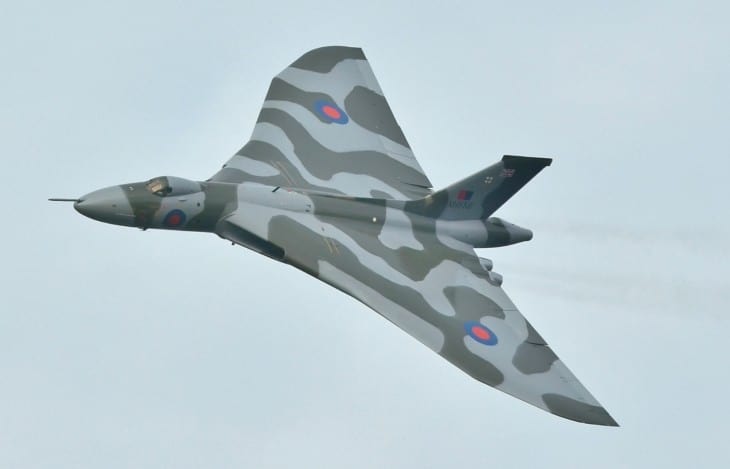 The B.1 is the initial production version of the Avro Vulcan. The B.1A featured an Electronic Countermeasures (ECM) system, the B.2 had larger and thinner wings and powered by Olympus 201-202 engines. Nine B.2 were also converted to MRR (Maritime Radar Reconnaissance) versions while six were converted for air-to-air refueling.

It can accommodate five crew members including a pilot, co-pilot, AEO, Navigator Radar, and Navigator Plotter. Two extra seats could also be fitted for crew chiefs if required. It has an external length of 29.59 meters, an external height of 6 meters, and a fuselage diameter of 2.6 meters. The tail height is 8.08 meters and the wheelbase is 9 meters. It has a wingspan of 30.30 meters and a wing area of 330.2 square meters. It has an empty weight of 37,908 kg if equipped and crewed, a maximum takeoff weight of 77,111 kg, a maximum payload of 10,000 kg, and a fuel tank capacity of 11,140 US gal.

Four Bristol Olympus Mk.101/ Mk.102/ Mk.104 power the Vulcan. It is an axial-flow two-spool turbojet engine with a six-stage LP and eight-stage HP axial compressor, ten flame tubes cannular combustors, and a single-stage HP single-stage LP turbine. Each engine produces a maximum takeoff thrust of 11,000 lbf. The aircraft has a maximum speed of 561 knots at altitude and a cruise speed of 493 knots at 45,000 feet. The travel range is 2,265 nautical miles. It can fly up to 55,000 feet and can climb at a rate of 16,000 feet per minute.