How Do You Display the American Flag on Clothing?

The first consideration is the placement of the flag. American flag patches worn on clothing are typically placed on the upper sleeve or above the left breast. Wearing the flag on the right or left sleeve is the most common placement.

When the sleeve contains multiple patches, the American flag patch should always be placed at the top. This shows that you put your country first before any other allegiances. Along with these rules, the flag should also be treated with respect, which means that you should not desecrate or mark the flag. Writing over the flag with a marker or affixing other patches on top of the flag could be considered disrespectful and may violate the US Flag Code.

Is It Acceptable to Wear a Reverse American Flag Patch?

A real American flag hung on a pole or staff has two sides. The canton, which is the blue field containing the stars, is always adjacent to the flagpole or staff. This allows the red and white stripes to flow in the wind.

In the early days of the US Military, as units charged into battle, the stripes on the flags would stream backward. When standing to the left of the flag bearer, the field of stars is in the upper left corner. When standing on the right side of the flag bearer, the canton is in the upper right corner. The placement of the American flag patch reflects the way that the flag flows when carried into battle. It also symbolizes the commitment of those who served.

The United States Marine Corps (USMC) does not authorize marines to wear flag patches on their battle dress (combat) uniforms. The USMC has historically avoided the use of insignia and patches on combat uniforms, as uniformity is an integral part of being a marine. The only insignia found on the uniform is the “US Marines” patch above the left breast and a pin to designate the rank of the Marine.

Can You Wear an American Flag Patch on a Sports Uniform?

This section outlines a variety of situations that are considered disrespectful, including displaying the flag on a sports uniform. The flag code does allow firemen, policemen, members of the military, and members of patriotic organizations to wear an American flag patch on uniforms.

Along with not displaying the American flag on athletic uniforms, the US flag code prohibits the use of the flag for any advertising purposes. The flag should not be embroidered, printed, or impressed on boxes, napkins, or any product that is intended for temporary use.

Where Should You Place an American Flag Pin? 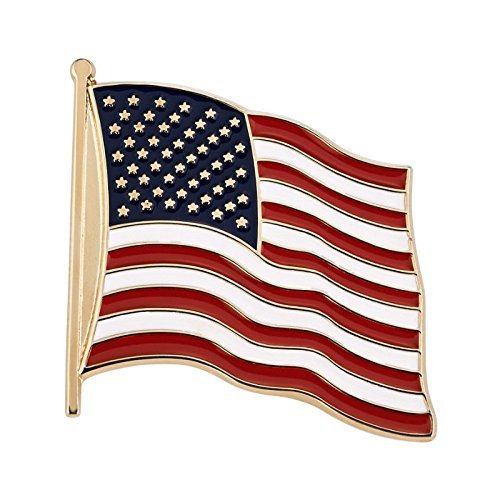 Which Way Should the Flag Face?

The direction that the flag flows depends on where it is displayed. When displayed against a wall or in a window, the American flag should always be displayed with stars in the upper left corner. This applies to flags hung horizontally or vertically.

When worn on clothing, the stars should be facing forward, allowing the stripes to stream behind. When hung from a pole or staff, the flag will face whichever way the wind blows.

The American flag should also be hoisted first and lowered last. If another flag, such as a state flag, is positioned to the left of the American flag, it should be placed at a lower position.